Recently, the good folks at Other People’s Pixels – a terrific website service dedicated to artist’s needs – commissioned an essay from me based on the premise that I would address the work of one artist who uses their site services. I was glad to write about Tampa-based performance artist Sarah Lynn Kelly as it allowed me to work out some ideas I’ve had for a long time regarding the documentation of performance art, particularly online. Enjoy the essay below, or read it here. 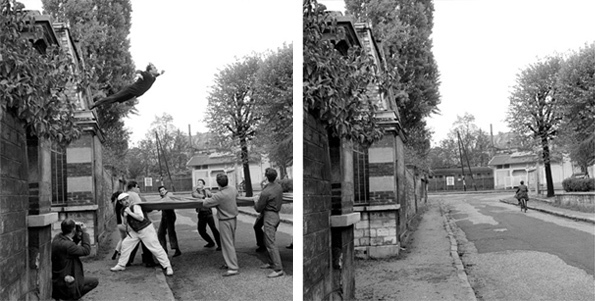 One day in 2007, I eavesdropped upon a lunchtime conversation had by two smartly-dressed women whose lanyard press credentials implied that they work in media. They were joking about a male coworker one had taken to calling “the predator.” The other delighted in the viciousness of the nickname, due to what I perceived to be her basic contempt for this coworker of concern. Then, suddenly, the originator of the nickname clarified: “predator” was, in fact, her abbreviated way of referring to the male coworker’s simultaneous professional roles as both “producer” and “editor” of whatever news program employed them all. Producer and Editor. Or, in brief: Predator.

It had never really occurred to me before how both producing and editing one’s own journalistic news program, purporting to showcase “reality” or “the truth,” might constitute an act of predation. But, then again, considering To Catch a Predator, Fox News, TMZ, “reality” television, and the whole fact-bending concept of “infotainment” altogether (replete with respective owner and advertiser conflicts of-interest): “predator” quickly becomes an incredibly useful turn of phrase.  I suppose its usefulness is why this act of eavesdropping has stuck with me.

Luckily, performance artists are not journalists (usually), but they nevertheless produce their own actions in the world or for the camera, and later edit those same actions for public consumption, or (I mean) exhibition. This is, perhaps, no better illustrated in the history of performance art than Yves Klein’s infamous “Leap into the Void” work from 1960, the iconic photographic “documenation” of Klein’s leap actually being a photomontage composite of the two negatives seen above. Just what might Klein have been preying upon with this early gesture of image culture deceit?

All performers are manipulative, and always have been. This is not a bad thing. I live with one, and have dated more than a few. They’re going to use your mind, and your time, and your attention, and (often dreadfully) your participation. This is true whether you view something live in the moment, or something documented, edited and republished elsewhere. You’re in luck if you need to feel needed, because performers are the neediest of all artists. Look at them. Look at them, please. Only you can give them what they need.

Take, for example, Tampa-based artist Sarah Lynn Kelly. She spends a lot of time in front of the computer, as many of us Netflix marathoners, online daters, and bored, late-night Internet grazers are prone to do. Grazing, as a matter fact, is just one act of many forms of predation. The grazer does not kill their food source, but instead picks at it slowly, bit by bit, allowing the source to regenerate between feedings. The Internet, it might be easy to argue, is the ever-replenished prey of Kelly’s parodic and maniacal performance practice exploring hyperlinked girl culture under advanced capitalism.

In performances for the camera like ‘Say You Wanna Dance, Uh Huh Ya’ and ‘Like, Y R U Sooo Obsessed w/ME?’ (both from 2012), we see Kelly within the familiar digital rectangle of lo-fi online videos. It is likely Kelly owns a Mac of some sort, and has simply pressed record on her Photo Booth application to document these later transmissions of exorcized youth-culture melodrama. Utilizing the inherited language of Mariah Carey and Whitney Houston lyrics, Kelly performs teenage heartache, tragedy, and redemption within the vernacular of pop music and their accompanying visuals. Here she is using cheap visual effects to multiply and parade her sexuality following an adolescent rejection, and here she pierces through the saccharine anguish of being dumped in a Lisa Frank inspired clip appropriate for your local Korean Karaoke chamber.

Just last year, Semiotext(e) published the English translation of Preliminary Materials for a Theory of the Young-Girl, originally written in 1999 and attributed to the French literary critics group Tiqqun. In it, the writers propose that the complete subsumption of desire by consumerism has reached its apex in the theoretical figure of the Young-Girl—a figure whose youth, sexuality, and, so-called ‘freedoms’ have been so totally designed, controlled, and manipulated by capitalist Empire into something seemingly natural and already inhabited. Capitalism is a predator, surely, but it operates much more like a parasitoid in this case: one that forms a symbiotic relationship with its host.  So fully internalized, it is perhaps the Young-Girl’s only recourse against the slow-death brought on by capitalist predation to bite-back, and I believe Sarah Lynn Kelly may be attempting to do just that.

Do you think Kelly is actually this way? Do you believe Klein actually took that leap? Interestingly, as an educated MFA-grad performing some grossly media-saturated form of adolescence, Kelly chooses to embody the artificial capitalist monstrosity that is the Young-Girl almost literally—replete with come-hither Internet gazes, make-up in excess, and an apparent relationship to celebrity that falls some sinfully entertaining place between deity worship and frenemy shit-talking. This is what capitalism has “made” of her, and Kelly pushes the artificiality to the fore with her use of glitchy visual effects, Tumblr-style graphic overload, and digital-lingo shorthand. She may appear naive or vulnerable to the lechery of the Internet (aka “the void”), but she is not; this is exactly Kelly’s way of luring us in to her own antagonistic form of media mania.

Perhaps this is lending Kelly’s practice too much weight, or perhaps not enough. Either way, for those like Kelly, performing strange ways in the bedroom or in the art gallery (on camera, or off), independently producing and editing real action allows the individual some small, self-authored method of rebuttal.