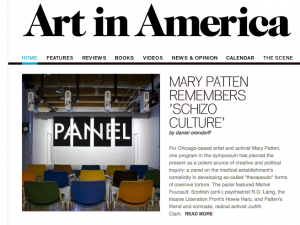 I’m pretty jazzed to be once again writing about Chicago arts going-ons for Art in America Online, and couldn’t be happier to have my first piece published on Mary Patten‘s important and incredible new show at threewalls gallery.

Titled “Panel,” Patten revisits the 1975 ‘Schizo Culture‘ academic symposium held at Columbia University, and in particular a panel on prisons + torture featuring Michel Foucault, Howie Harp, RD Laing, and Patten’s friend Judy Clark – who remains a political prisoner to this day. Check out the profile either on the Art in America website, or below…

“Schizo Culture,” a four-day 1975 symposium featuring avant-garde artists (John Cage, William Burroughs) and academics (Gilles Deleuze, Félix Guattari, Jean-François Lyotard) was a milestone event in the ascendency of French theory in New Left political thinking—even if it remains relatively obscure to this day. Focusing, in part, on prisons, torture and emergent techniques of state-led social repression, the symposium was organized by French literary critic Sylvère Lotringer at Columbia University, where he remains a professor emeritus. For Chicago-based artist and activist Mary Patten, one program in the symposium has pierced the present as a potent source of creative and political inquiry: a panel on the medical establishment’s complicity in developing so-called “therapeutic” forms of coercive torture. The panel featured Michel Foucault, Scottish (anti-) psychiatrist R.D. Laing, the Insane Liberation Front’s Howie Harp, and Patten’s friend and comrade, radical activist Judith Clark. 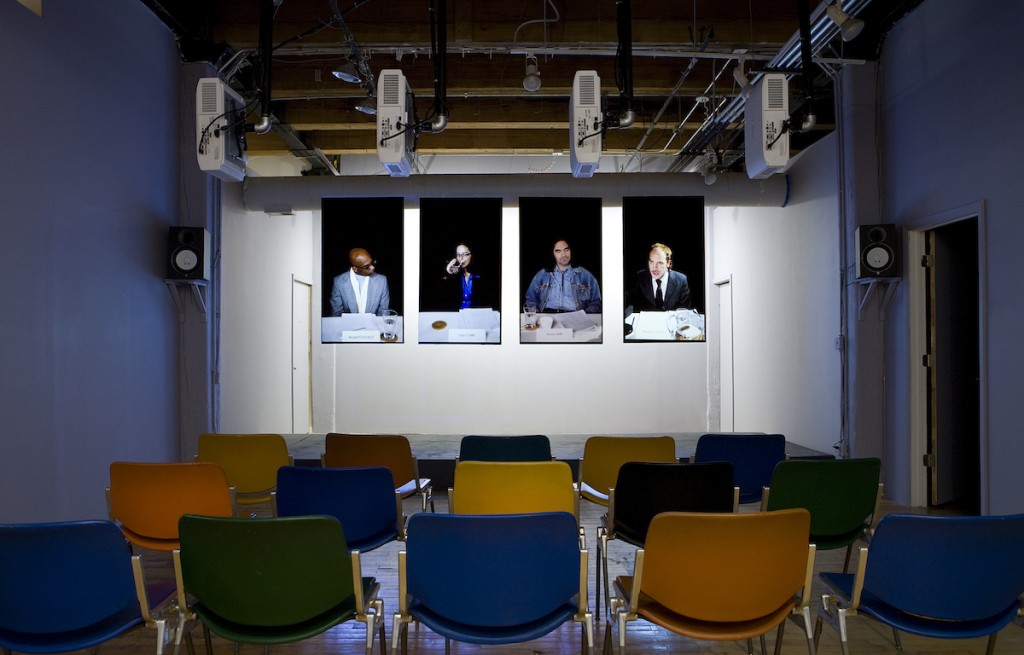 In “PANEL,” Patten’s current exhibition at Chicago’s threewalls gallery (through Feb. 23), the artist has produced a four-channel video installation, a quartet of abstract screenprints, and a graphite wall drawing that each re-present fragments of the panel while simultaneously relaying what the artist (somewhat reluctantly) termed in conversation “the auratic significance” of the event and its iconic participants. By this Patten means the surplus, affective content of the live proceeding that is irreducible to static form, or to language, as well as the persistent significance of this hodgepodge of panelists condemning the medical establishment’s pathologizing of political dissent. “The intention was not exactly to introduce a space outside of consciousness,” Patten told A.i.A., “but rather to come up with some way of representing that which escapes language.”

Concern over the more enigmatic qualities of the symposium was exacerbated, in part, by how Patten came into possession of the hard-to-find (and even harder to verify) transcript of the conversation. Although “Schizo Culture” is listed as having been presented by the influential journal Semiotext(e), which Lotringer founded in 1974, no exact audio or video recording of the Foucault-led conversation is available. Instead, Patten was sent a transcript of the panel by Clark, who had herself received a copy from Lotringer in 1999 while incarcerated at New York’s Bedford Hills maximum security prison, where she is currently serving a 75 years to life prison sentence for her small part as getaway driver in the 1981 Black Liberation Army-led robbery of a Brink’s armored truck that resulted in three deaths. The transcript, published as “Schizo Culture: On Prisons and Psychiatry” in only some of the editions of the 1996 Semiotext(e) publication Foucault Live, struck both Patten and Clark as odd because it featured none of the spontaneous developments rumored to have occurred (audience interruptions, for instance). Additionally, Clark was confounded by the prevalence of her comments, when in her own memory she was frequently drowned out by her male colleagues.

In “PANEL,” four vibrant, nearly human-scale screenprints of smeared fluorescent ink are Patten’s strategy to render affect, functioning like mood rings for each of the panelists; the cheerful coral of Harp contrasting with the saturnine greens of Laing and the charged colors of Clark (anarchic red and black) and Foucault (shocking pink and blue). The works appear both in the gallery as what Patten calls “mirror selves” to the figures on screen and in the video as formless, presentation-interrupting drifts she refers to as “daydreams, or quiet moments following a message of emergency.” 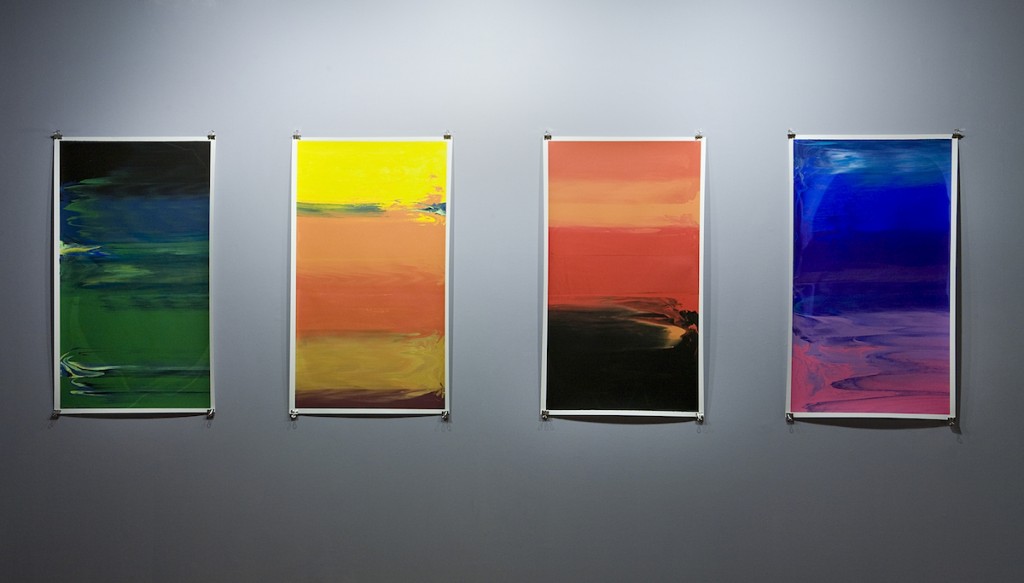 Uncertain of the exactness of the transcript’s contents, and increasingly skeptical of any possibility for historical accuracy, Patten turns to the techniques of abstraction and installation to give shape and space to what is not, or can never be, textually relayed. This same recourse to esthetics is shared by Lotringer, who began publishing collages alongside (or in lieu of) text-based theoretical works in Semiotext(e) shortly after its founding.

Lapses, gaps and fragmentation likewise figure into the installation space of Patten’s four-channel video featuring portrayals of Foucault, Clark, Laing and Harp recorded simultaneously with one high-def camera framing each respective participant. Quoting the standard architecture of an academic presentation, the panelists appear contained and separated in cells of their own, as isolated projections upon four screens suspended high. The overall video is loosely organized into four movements, one dedicated to each panelist and each bookended with the least engaged-seeming participant sinking off-screen and replaced by the abstract content of Patten’s screenprints. Characterized by visual disorder and vacancy, these formless passages are redoubled spatially by the negative space separating each panelist’s screen and the emptiness of chairs in a rainbow of colors laid out before them.

On the minds of the panelists in ’75 was the general public’s collective ability to still, in Harp’s words, “freak out” over global sociopolitical turmoil during a time that saw dissenting political activity increasingly labeled as crime or mental illness by state powers. Choosing, as Patten does, to deny any coherency or clarity to the panel under scrutiny here, however, does not deny the relevancy and clarity of the panelists’ powerful thoughts. Instead, Patten’s “PANEL,” with its built-in pauses and dreamscapes, urges expansive and experimental thinking in the psychic open spaces beside, or between, or beyond, the rearticulated rhetoric.